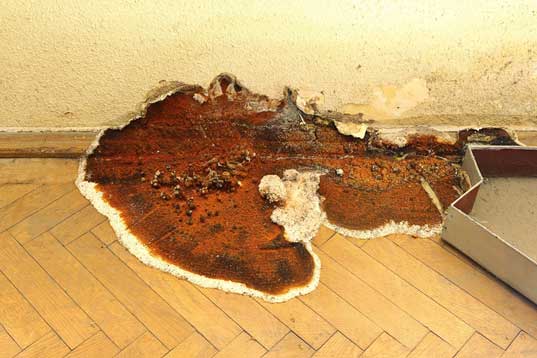 We often discuss the benefits of Pre-Acquisition Building Surveys and Schedules of Condition on our blog, talking about the potential risks that tenants face when they commit to leasing a commercial property and the repair cost liability that they take on in doing so without having a Chartered Surveyor undertake investigations.

Recently, we encountered a case that perfectly demonstrates the value that these investigations can have…

We were instructed to carry out a Pre-Acquisition Building Survey and Schedule of Condition for a client who was intending to take a lease on a commercial building in Bolton.

During his investigations, our Chartered Surveyor Gareth Clarke inspected and found dry rot within the sub-floor void of the ground floor. Dry rot is an aggressive destructive form of timber decay in a building caused by certain species of fungi that digest parts of the wood. Dry rot is considered the most serious form of fungal decay in buildings as it can spread through a complete building and destroy the fabric of the property.

Gareth spotted mycelium, which is one of the early stages of dry rot, and discovered that this destructive rot was beginning to attack the timbers under the floor. The next stage of dry rot is for brown fruiting bodies to form and by this stage, the timber will be badly affected.

Had the Pre-acquisition Building Survey not been undertaken, the issue would have gone unnoticed, therefore being able to worsen. Down the line, when the rot would have spread and affected the floor timbers, our client would most likely have found that they were liable for building repair costs caused by the rot.

Until we inspected the property, both the prospective tenant and the landlord were unaware of the presence of the dry rot. Due to the potential severity of the issue, the tenant has now pulled out of the deal, potentially saving him a fortune in building repair costs and also lots of disruption to his business.

Our investigations have also made the building’s landlord aware of the issue, giving them the opportunity to treat the dry rot before it spreads or worsens.

The uncovering of dry rot in this instance is a prime example of why having reports prepared on the condition of a commercial property prior to signing a lease or taking occupancy is so important.

For more information on the Pre-Acquisition Building Surveys and Schedules of Condition we offer to prospective tenants looking to take up a lease on a commercial property, please contact us.