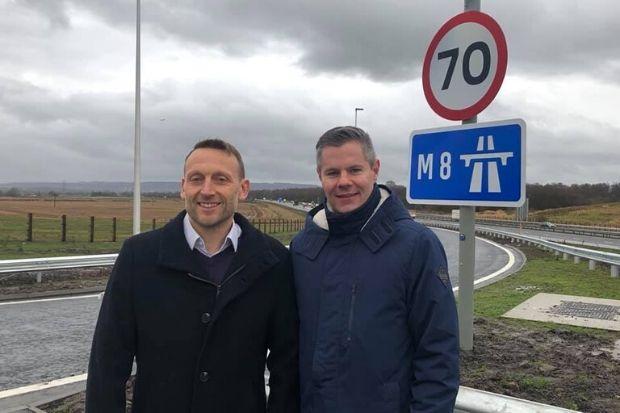 A significant milestone has been reached in an award-winning residential housing development in which Lea Hough has been heavily involved.  Completed three months ahead of schedule, Junction 29A of the M8 motorway near Glasgow opened in December 2019 as part of BAE Systems’ ongoing transformation of a former Royal Ordnance Factory site into a multi-million pound housing scheme – Dargavel Village.

The junction connects the Dargavel Village housing development and its surrounding areas to the M8 motorway, giving residents greatly improved transport links to Glasgow and beyond.

All large civil engineering projects take a great deal of planning and preparation and in this case, also required the acquisition of the land from private landowners. This is where Lea Hough’s planning team, led by Richard Bailey, came in. The land required to build the junction was owned by three different landowners and a section of the land was part of a former landfill. Both of these factors made the acquisition challenging to achieve, particularly in getting the licence holder of the landfill site to engage.

Lea Hough first began working with BAE Systems on their Bishopton site in 2002 and have worked closely with the team, led by Jon Gettinby, ever since.

Although only one part of the overall Dargavel Village scheme, the motorway junction in itself is a multi-million pound project. Commencing in 2017, the total area of the area developed for the new junction is over 170,000 square metres and the design and build involved over 50 companies.

Redevelopment of the former Royal Ordnance Factory site commenced in 2012, and Dargavel Village now has over 1,200 homes, a new park-and-ride car park, a village centre with supermarket and a number of green open spaces. Upon completion in 2034, Dargavel Village will consist of 4,000 new homes, along with a range of community facilities and further developments to infrastructure.