A Listed Building in Preston’s Winckley Square has been transformed into a modern day working environment following an extensive refurbishment scheme, which has been overseen from the start by Lea Hough Chartered Surveyors. The Grade II Listed Building has been home to 15 Winckley Square Chambers since 1983 and after the two year programme of works, including external and internal refurbishment, is now a fine example of Georgian architecture in the heart of Preston city centre.

Originally appointed in 2009, Lea Hough were asked to survey the Grade II Listed property at 15 Winckley Square, being subsequently reappointed in 2017 to carry out a further Condition Survey Report. Dating back to as early as 1801, several of the buildings in Winckley Square carry Listed status as a means of protecting their historical and architectural significance. Grade II listings applied to buildings dictate that alterations and building work can’t be carried out without written consent from the relevant authorities.

Gareth Clarke, Chartered Surveyor at Lea Hough, was subsequently appointed to specify and tender the important repair works. This involved the drafting of drawings, preparation of a detailed specification, and selecting suitable contractors to price the works. Following this tendering process, Lea Hough acted as Contract Administrator, project managing the works through to completion.

Upon completion of the external repairs project, Lea Hough were appointed to submit Listed Building Consent for internal ground floor alterations in 2018. The current arrangement of the building had various departments spread over the three floors. The aim of the alterations was to create a more inclusive environment on the ground floor allowing departments to be located more closely together, free up various rooms that were currently being used as storage, and create a video conferencing facility. To achieve this, two loadbearing internal walls were required to be removed. 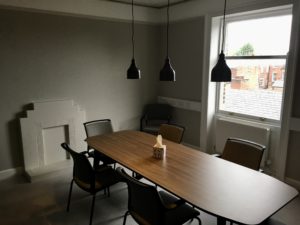 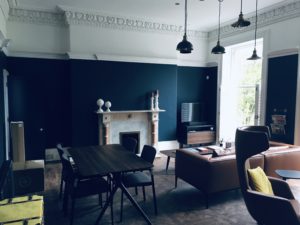 Upon obtaining Listed Building Consent, Lea Hough were again appointed to specify, tender, contract administer, and project manage the works. 80% of ground floor was refurbished during this phase of works.

Successful completion of the ground floor alterations and refurbishment led to the refurbishment of the reception area, and first and second floors in 2019. Although internal alterations were not undertaken to these remaining areas, full redecoration was completed, along with floor finishes and a new lighting scheme installed throughout. This involved sympathetic revival of many original features at the property.

The Chambers appointed Diamond Interiors to assist with supplying furniture for the meeting rooms, working areas, and reception.

The overall result of this project has been the creation of a truly modern working environment, yet one that both preserves and celebrates the features of the building’s heritage. It is hoped the refurbishment works will secure the building’s future use for many years to come, providing an enjoyable environment in which to work.

“Gareth’s assistance on our Chambers refurbishment proved to be absolutely invaluable. It was an extensive project involving its own complications, not least due to its listed status, but the service provided by Gareth and the Contractor ensured that everything ran smoothly and that the end result was everything we had hoped for and more.”