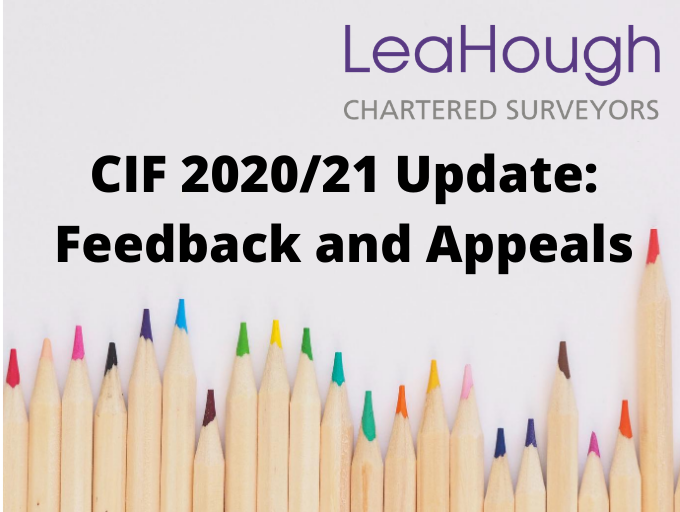 The Department for Education (DfE) has released its feedback following the most recent round of Condition Improvement Fund (CIF) bids for 2020/21.

The release of the feedback provides an opportunity for those schools that were unsuccessful in attaining funding for their project to assess where they may have gone wrong in the bid process.

This is a process with which Lea Hough’s team of specialist School Building Consultants can also help. We are happy to speak to academy schools we have not worked with previously, reviewing the feedback provided and advising on potential areas in which the bid could be improved by way of a free CIF funding audit. In the majority of cases, we will then carry on to work with the school when the next funding round opens, putting the suggested measures in place to submit an improved bid with a higher likelihood of gaining funding.

Where there has been a fundamental error in the way the bid has been assessed, it may also be possible to follow the CIF appeals process. The window to appeal the result of the bidding round will open in September.

Our team have a strong track record of success and have worked with a number of academy schools who had previously failed in their attempts to achieve CIF funding. For example, in the current round, we worked with The Pennine Trust, a small multi academy trust in Lancashire, helping them to achieve CIF funding for 8 projects across their academy schools. The trust had previously failed in their attempt to win CIF funding.

For more information on how to appeal a CIF bid, or to speak to us about your previous unsuccessful bid(s) and our free CIF audit service, please get in touch.