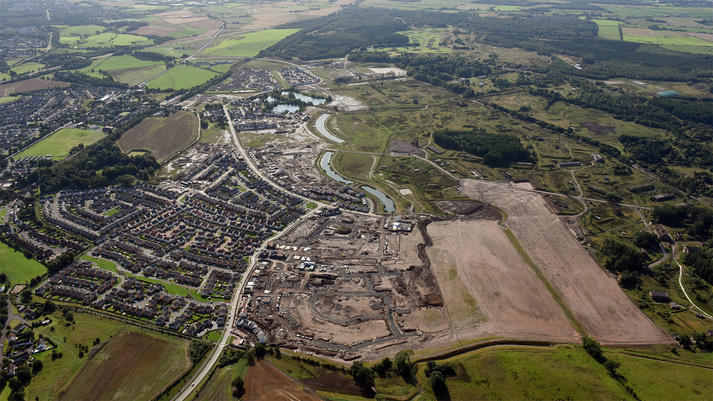 A project in which Lea Hough has been involved with for many years has received award recognition at the Brownfield Awards 2021. Dargavel Village won three awards in total, making it the most successful project on the evening. The awards were:

The prestigious event, which is in its 17th year, celebrates excellence across a range of categories in the brownfield and contaminated land sector.

Dargavel Village is one of the UK’s largest brownfield regeneration projects. On the site of a former Royal Ordnance Factory (ROF) at Bishopton, landowner BAE Systems is redeveloping the 1,900 acre site to provide 4000 homes; commercial and community hubs; primary school, internal infrastructure; road and rail connectivity; sustainable drainage solutions and a range of facilities including play areas and a 1,000 acre woodland park.

Having previously acted in the transformation of the former ROF Chorley into the highly successful and sustainable Buckshaw village Lea Hough were appointed in the early stages of the planned regeneration of ROF Bishopton and played an integral role in the planning, remediation and development to form Dargavel Village, which has become the aspirational place to live in Western Scotland.

“To have the project receive not one but three Brownfield Awards – including the prestigious judge’s award – goes a long way to show the great strides being made by the BAE team in this ambitious programme.”

The project has previously received national recognition when it was awarded first place in the Excellence in Planning for Homes – Large Schemes (50 or more homes) at the national RTPI Planning Excellence Awards in 2019.

In receiving its awards, the Dargavel project was recognised for its demonstration of respect for local ecosystems in a brownfield project, with long term planning to enhance biodiversity and amenity value. Its entry showed innovative biodiversity enhancements, and how the team are working to preserve existing species on the land as well as a long-term plan to accommodate new species, which had been previously lost from the local area.

Further details of the scheme can be found here.