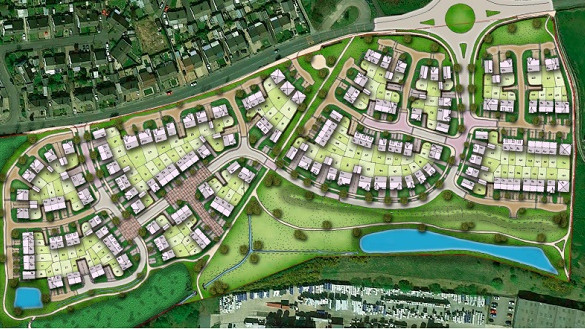 A developer has been chosen for a housing scheme on a plot of land in North Blackburn, following marketing by Lea Hough’s team.

Vistry Partnerships has been named as the preferred developer for the scheme, located south of Whalley Old Road on the outskirts of Blackburn, that will deliver 165 homes.

Lea Hough’s Land and Development team have been representing two private landholders who own two of the three parcels that make up the 19.75 gross acre site. The land was allocated for residential development in the draft Blackburn with Darwen Local Plan following representation by our team.

Previously unoccupied grassland, the land has undergone a competitive informal tender process after being marketed by our team.

The scheme proposed by Vistry Partnerships comprises two-, three-, four- and five-bedroom homes, including 132 to be sold under Vistry’s Bovis Homes brand.  A further 33 homes have been earmarked for shared ownership with a local registered provider.

Blackburn with Darwen Council’s executive committee will meet in April to consider the appointment and proposals for the Whalley Old Road site in further detail.

This scheme is a great example of Lea Hough’s services in the area of land and development. Having initially helped to identify the land as suitable for development, our consultants were then appointed by the landowners to consult and work closely with the local authority’s planning department. Having overseen the land being allocated for development, we then marketed the site, helping to select an the most suitable developer.

For more information about our services in this area, visit https://www.leahough.co.uk/services/planning-land-development/